Modi's, BJP's, bravado: The decision to field Modi from Varanasi an empty gesture 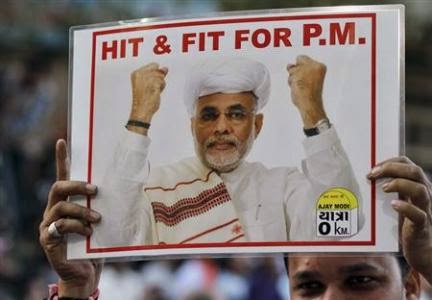 The Bharatiya Janata Party's central election committee (CEC) after a marathon session of about 11 hours announced at 10 in the night on Saturday that the party's PM candidate Narendra Modi will fight the Lok Sabha election from Varanasi. Modi does not belong to Uttar Pradesh. He should have fought from Gujarat. That he would have less legitimacy as prime minister if he gets elected from Gujarat is the inevitable inference. When Morarji Desai was chosen prime minister of Janata Party, of course the decision was made after the election, he was a Lok Sabha member from Gujarat. That did not make him any less of a prime minister. It is a pity that Modi who takes pride in Sardar Patel should yield to the pressure of the stupid Uttar Pradesh/Hindi/Hindutva lobby and fight the election from UP. Gujarat can boast of its legitimate Hindutva credentials, though its diabolical variant makes it a little less attractive. Of course, the UP's variant of Hindutva is not any less disgusting though the criminals who had brought down the Babri Masjid on December 6, 1992 had disappeared into the crowd and they did not have the courage to claim that they committed the crime.
There is then to need to look for other reasons for the BJP's decision to field from Varanasi. A very lame excuse is that if Modi contests from UP and from Varanasi the party would win 10 more seats than it would if he did not. That is, if the BJP is set to win 10 seats from the state as it did in 2009, then Modi contesting from UP would take the tally to 20. It is a rather strange, lame argument. If Modi the campaigner is able to charm the people everywhere in the country and he is going to increase the party's tally without fighting the election from any of the constituencies in those states, then he should be doing it in UP as well. That is, he should be able to win more seats for BJP in UP without contesting from the state.
The other part of the lame argument that is being put forward is that by fighting from Varanasi, he would have a ripple effect on the whole of eastern UP and parts of western Bihar. A bad argument again.
The real reason seems to be that Modi fighting the election to be prime minister of India from Varanasi is to send out the message that Modi the Hindu fighting from the Hindu city of Varanasi will bring the BJP, the Hindu party, to power. The BJP need not fight shy of flaunting its Hindu credentials because it desires to represent the majority Hindus. It is a legitimate desire. It can also argue that though it is a Hindu party it is not opposed to other religions in India. If Muslim League in pre-Independence India were to have come to power, then it would have remained a Muslim party without being hostile to Hindus. BJP is then in a similar position.
The BJP is shy of blatantly its Hindu identity at a time when so-called identity politics are the political fashion of the day. It wants to camouflage its Hindu identity politics under the rubric of nationalism, which is both cowardly and diabolical.
Modi's tacit Hindutva beliefs get a boost from fighting the election from Varanasi/Benaras/Kashi, the Hindu city of millennia. The stupid secularists would want to wade into the debate and talk about the Buddha's association with Kashi, and others would point to the presence of Musim weavers who have been living in the city from Kabir's times in the 14th century onwards, or to the example of the Benaras musician Ustad Bismillah Khan, who did not ever want to leave the city on the banks of Ganga. But it is not really the Varanasi of Muslim weavers and Kabir and Bismillah Khan along with that of ancient holiness and the illiterate and the lumpen brahmins known as pandas of the city. For a nice portrayal of the gangsterism of the pandas of Benaras, the 1968 Hindi film Sangharsh starring Dilip Kumar, Balraj Puri, Vyjayanthimala and Sanjeev Kumat and directed by H.L.Rawail, where the feuds and the violence of the Benaras pandas has been shown.
There is nothing innocent about Modi wanting to fight the Lok Sabha election from Varanasi. It would be futile to argue that he would lose the election. It is a case of lack of political integrity.
If the BJP-wallahs want to point out to the cases of Indira Gandhi fighting from Chikmagalur or from Medak, and Sonia Gandhi fighting from Bellary, then the answer is that both of them were on the look out for a safe seat and it was purely political in nature and there was nothing ideological about Chimagalur, Medak and Bellary. In the case of Modi fighting from Varanasi, it is more than political. It is ideological and it is an ideology of majoritarian Hindutva with all its religious connotations that is the reason behind BJP's and Modi's decision. The fact that neither Modi nor the BJP have the courage to confess to this aspect is an example of political pusillanimity.
at March 16, 2014

Did you think about picking the most recommended Bitcoin exchange service: YoBit.

If you are looking to BUY bitcoins online, Paxful is the ultimate source for bitcoins as it allows buying bitcoins by 100's of different payment methods, such as MoneyGram, Western Union, PayPal, Credit Card and they even allow exchanging your gift cards for bitcoins.

YoBit enables you to claim FREE COINS from over 100 distinct crypto-currencies, you complete a captcha once and claim as much as coins you can from the available offers.

After you make about 20-30 claims, you complete the captcha and resume claiming.

You can click on CLAIM as many times as 30 times per one captcha.

The coins will stored in your account, and you can exchange them to Bitcoins or any other currency you want.

Have you ever tried maximizing your free bitcoin collections with a BTC FAUCET ROTATOR?

The question cannot be evaded as to whether lockdown was a success or failure. Former Congress president Rahul Gandhi’s assertion that the...